Anywhere Festival is a Queensland not-for-profit company leading the world with exciting and engaging storytelling and performance that happens anywhere.

Anywhere Festival (6-23 May 2021) is a globally unique and local cultural experience for locals and visitors alike: where local businesses and homes host performances so artists can creative incredible work without all the financial burdens that are often placed on them when presenting independently.

Anywhere Festival began in 2011 as Brisbane’s revolutionary take on the fringe festival concept, taking all the things people love about fringe festivals and removing the things they don’t by turning it into a discovery of places and performances by using local nooks and crannies: poetry in light houses, circus in driveways, music in backyards, storytelling on ferries, theatre in hedge mazes and musicals in aeroplanes. 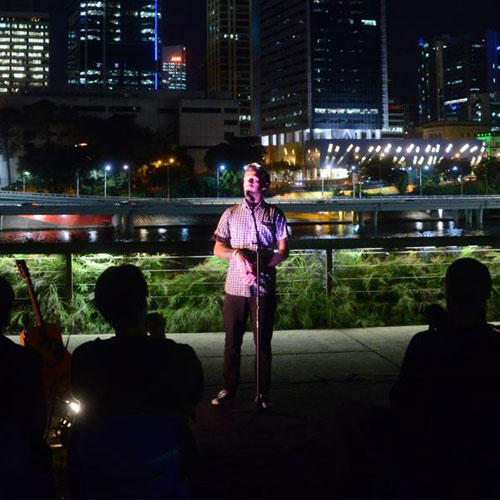 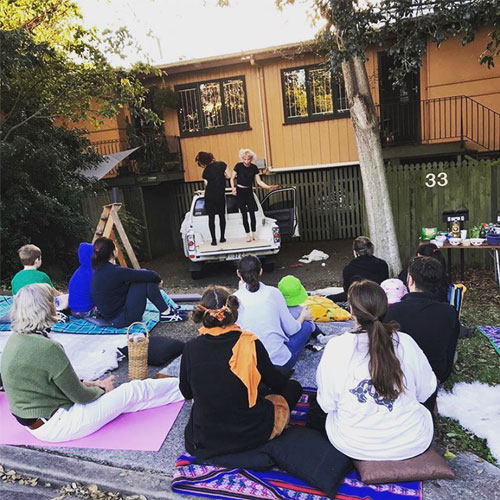 Since 2011 it has become something much more than “Brisbane’s Fringe Festival” with 500 performances by independent performing artists every year, being welcomed into Noosa and the Sunshine Coast.Anywhere offers up a vision where artists can step away from the fringe and be at the core of society by being anywhere.

Anywhere Festival has inspired many other festivals and practitioners, providing the framework and ideas that many have followed when COVID-19 restrictions closed theatres and the idea of performing in streets, outdoors in a non traditional spaces became the only way. Anywhere Festival led by example in Queensland: working with and paying independent artists to deliver 89 performances of 21 different productions of circus, music, comedy, opera, drama, theatre, poetry, and Shakespeare to nearly four thousand in person and online ticket buying attendees and 100,457 streams and downloads between late May and September.

Story telling began as something we did around camp fires and over time it has been ghettoed inside traditional theatre venues and the structures that go with them. We believe that for our own stories and performance to survive we have to stop creating theatres where people “go” for live performance. People need to see and engage with performance anywhere regardless of their income or location.

We also believe that restricting performance to theatres places an unnecessary gatekeeper for artists and audiences. The majority of performers and producers wait for rare slots in theatres and fringe festivals where there are more performances than audiences members and the entire financial risk is placed on the independent producer.

We’ve also demonstrated that there is great opportunity for business and communities to benefit by placing performances in public and business locations. We do this through innovative partnership with local businesses and performers by removing the fiscal and creative barriers in audience attendance. We create performance right where people live, work and play to make stronger, more vibrant communities.

Paul created Anywhere Festival with Co-Founder Alex McTavish in 2011 to fill the aching void of performance venues and opportunities in Brisbane: that’s where the idea of a festival that didn’t use traditional venues took hold.

Since then as Artistic Director he has worked with 2,706 performance makers to create 3,829 performances of 741 productions from Little Match Productions to Tim Ross, Sui Ensemble to Imploding Fictions, Merlynn Tong to The Travelling Sisters. He has always been focussed on asking “Why?” along with “Why not?”, challenging the status quo at every opportunity to make things better, or if not better, at least a hell of a lot more interesting.

Paul Osuch holds a Bachelor of Business from the Queensland University of Technology and a graduate of the NIDA Playwrights Studio. He is an Australia Council for the Arts Emerging Leader, and a Queensland Government Cultural Champion. 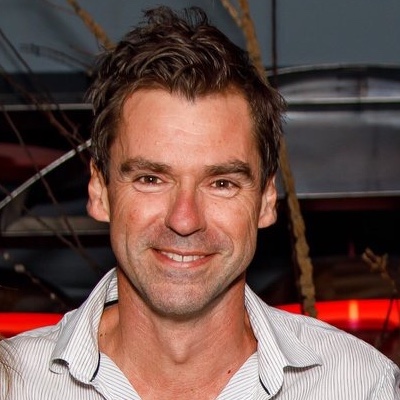 Prior to Anywhere Festival, Paul was Artistic Director of Borderline Defamation Productions for several years, producing and directing the world premiere of many new works leading a charge of hyper local plays, including Dirty Caff’ about the late 90s Brisbane nightclub and All My Friends Are Leaving Brisbane by Stephen Vagg, which has since been adapted into the Australian Film Industry (AFI) Award  nominated feature length film. His plays have been produced He has created and marketed major productions from the Soho Theatre and Battersea Arts Centre in London to the Cement Box Theatre in Brisbane.

Toni Wills is the Noosa and Sunshine Coast Creative Producer of Anywhere Festival. She joined the Anywhere team in 2017 to co-ordinate the establishment and delivery of the inaugural Sunshine Coast and Noosa regional program.

She is also a playwright, dramaturg, workshop facilitator and independent producer. She holds a Masters in Creative Arts and a Bachelor of Arts/Law. With over fifteen years working in the design and delivery of creative and education projects across the legal, community and Arts sectors, she now focuses on storytelling, production and developing opportunities for regional artists. 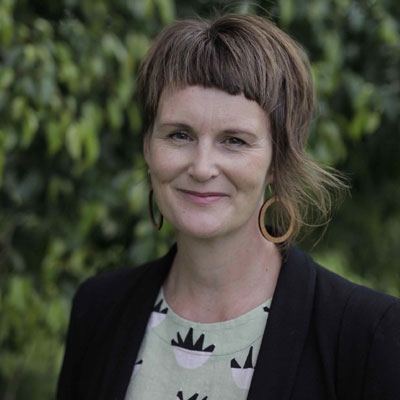 Tim is a freelance creative producer who thrives on the challenges of bringing together diverse stakeholders to create innovative projects. Working with artists, organisations, businesses, and communities he is able to find surprising solutions, through empathy, creativity, and a mix of artistic and business processes.

Tim Monley’s creative practice is focused on creating meaningful connections between people through play and storytelling. He has created real world games with thousands of players, technology driven interactive installations, and gamified theatre. Having roots in community theatre and ritual, his work continues to discover ways of building connections between people in creative ways. He sees the movement toward digital theatre as an exciting opportunity to build deeper global connections, taking back the technology that is being used to commercialise our attention and using for the creation of an open and healthy culture. 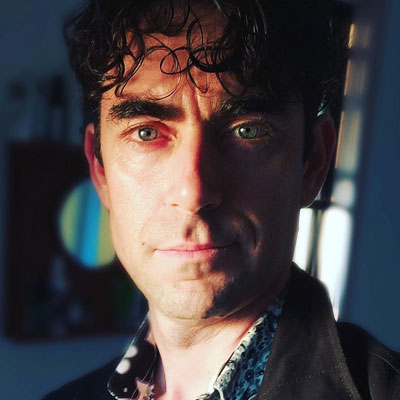 Since 2009 Timothy has fashioned diverse and imaginative seasons of theatrical experiences as the Artistic Director of THAT Production Company.

He has directed over 20 productions, including the Australian premier of the Pulitzer Prize-winning play Ruined by Lynn Nottage (at Studio 188, Ipswich) Saved by Edward Bond (at the Old Courthouse, Ipswich); Les Liaisons Dangereuses (at the Roundhouse Theatre, Kelvin Grove); Spring’s Awakening (at Metro Arts, Brisbane). Timothy studied at the Lee Strasberg Theatre and Film Institute in New York, and trained at the JUTE Theatre Company’s Director Development Program facilitated by Dr David Fenton. Timothy has also worked as an Assistant Director with Backbone Youth Arts, JUTE Theatre Company, Spotlight Theatre, and Fractal Theatre Company. In 2017 his production of Cosi with Beenleigh Theatre Company was nominated for seven Gold Coast theatre awards, winning Best Supporting Actress and Best Magic Moment of Theatre. In 2018 Timothy directed Summer of the Seventeenth Doll (also for Beenleigh Theatre Company) and Baal by Bertolt Brecht for Vena Cava Theatre Company. In 2019 he was a directorial observer for Death of a Salesman at Queensland Theatre, directed a staged reading of Thread by Emma Workman for La Boite’s HWY Festival and directed the Queensland premiere of Kill Climate Deniers by David Finnigan 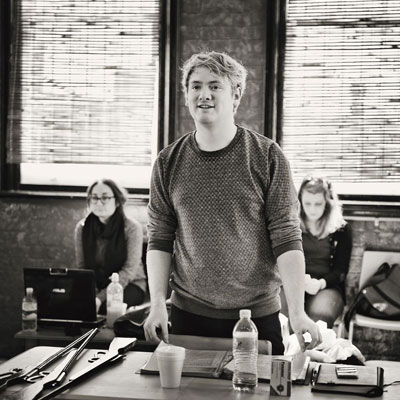 Senior management executive with 20 years of high-level knowledge of, and experience in, the arts, cultural and creative sectors. Proven expertise in the development and maintenance of professional relationships with multiple stakeholders; involving corporate, community and government agencies. Advanced negotiation practice and customer service behaviour. Exemplary record of innovative strategic policy and planning. Extensive knowledge of local, national, and international cultural trends, issues, and opportunities in the arts and cultural sector.

Amanda is an Australian lawyer who achieved first class honours. During the undertaking of her Bachelor of Laws (Hons) degree Amanda majored in corporate law and international finance and since then further studied a Grad Dip in Applied Corporate Law, a Grad Dip in Legal Practice, Applied Language Chinese Diploma, a Grad Dip in Engineering and the Company Directors Course. These studies are also in addition to a degree in Commercial Law Amanda previously completed which provided additional commercial skills in the disciplines of accounting and finance.

Amanda possesses a fluency in both Chinese and French and basic Russian language abilities. In addition, Amanda has recently completed an MBA.

Businesswoman by trade, thespian by choice… From a young age, Marina realised her love for the creative industries and has been involved with all aspects of the performing arts ever since. She is very proud to base herself of the vibrant Sunshine Coast where she has served as a Sunshine Coast Council Arts Ambassador through their Arts Plan development.

Marina is the Festival Director of the Imagineers Festival hosted by Montessori International College (MIC) where she holds the role of Events and Community Engagement Manager. With a passion for passing on her love of theatre, she teaches performing arts at BYTE (Buderim Youth Theatre of Excellence) and has directed and choreographed many of their shows. Whilst also as being an independent producer working with creatives, facilitators and business owner. In 2018 she produced Likely Story, a show about books set in a bookstore as part of the Anywhere Festival, winning them an award.

Megan Joy Lavender is a transformational leader of organisations with a focus on stakeholder engagement. An experienced public company director and government board member, she is also peer recognised as one of the Asia Pacific’s best third sector CEOs having held senior executive roles in the corporate, government and third sectors.

Megan presently serves as a State Government appointed board member of the NSW Ministry of Health Centre for Health Record Linkage and has been commissioned by the Minister for Lands and Water as Deputy Chairman of the Gosford Showground Crown Lands Trust.

Megan is an arts, education, speech and drama graduate of Macquarie University and Trinity College, London.

With 37 years experience in national/international markets at senior management, contract/consultancy level in marketing, media, advertising and creative fields that commenced in movie distribution including Walt Disney, Pixar, Roadshow, Buena Vista, Touchstone. Working across film, television and radio in Australia, US and UK as a qualified journalist, producer and director through the 80/90s he continues to partner and consult in those fields as well as new digital avenues.

He ran his own Event/PR/Media company for two decades during that time and continues to represent major brands, organizations and individuals with counsel and strategic thinking, expertise in innovative communications, production values, marketing/sales, creative/brand, digital/film/tv, cultivating cultural change, organizational alignment, change thinking and project development. Formerly AJA/MEAA, Board of RSA (London), AICD, holds B.Psy., and a number of additional qualifications.

Gary continues to concentrate on strategic change thinking and advising in across industries as well an in the philanthropic and fundraising space.

Nycole is a writer, producer, director, scholar and researcher with over 27 years’ experience in teaching at tertiary level and in the creation and production of creative and literary projects and festivals in urban and rural communities in Australia, Japan, the UK and the Middle East.

In 2016 she established Peripheral Arts, an arts organisation, which puts focus on storytelling and creates collaborative, engaging creative arts projects and productions for venues and festivals with a focus on artist-led initiatives and high quality production. Appointments include assessor Regional Arts Development Fund.

Nycole has a PhD in Literature and has published widely in the area of literary representations of gender, space and the body. She is editor of a multidisciplinary anthology Intervening Spaces (Brill 2018), a transnational examination of the inter-connective impact and potential of performance, art and design on people and place. And has recently published her book Heroin(e) Habits: Potential and Possibility in Female Drug Literature (Gylphi 2018). Nycole teaches into theatre and performance, literature and creative industries programs at the University of the Sunshine Coast.

After doing an incredible job as a Creative Producer setting up Anywhere Festival on the Sunshine Coast, we invited Nycole to join our board. Thankfully she accepted and you can find her full bio there

Alex is a writer, actor, artist and arts leader, with more than fifteen years experience in the not-for-profit, corporate and cultural sectors in Australia and the United Kingdom. She specialises in organisational and sector development, cultural change management, business planning, policy, advocacy, community engagement, communications and program development.

Alex is passionate about the arts and is driven by a desire to connect people to their communities by the stories they share.